At 3.34am, today, the hatch between the International Space station (ISS) was closed, 250 miles above earth. 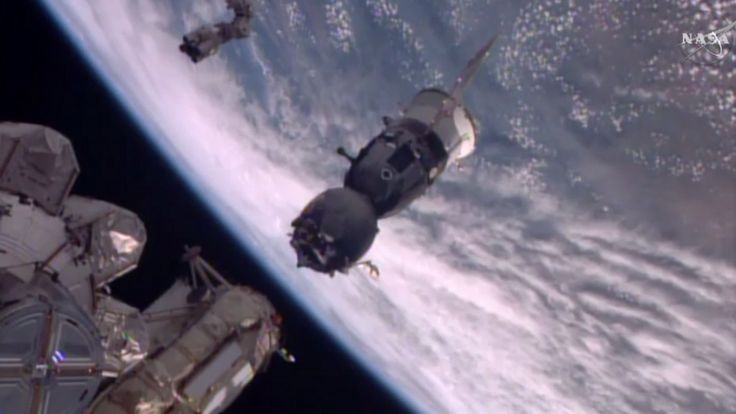 After 186 days on ISS, today at 652 the Soyuz capsule undocked from the International Space Station (ISS) and separated from International Space Station. The capsule fired off several engine thrusters to push itself clear of the International space station (ISS) and, drifted off to a distance of approximately 12km from the orbiting International Space Station .
At this point, the engines the fired off again, this time sending the three astronaughts capsule into a hot external descent back to earth with temperatures reaching up to 2,000 degrees celsius.
At precisely 9.20am, the capsule’s rocket motor will fire for a total of four minutes and 45 seconds, placing the Soyuz capsule on a trajectory that will effectively take it out of orbit.
The capsule is currently orbiting earth at 17,000 miles an hour and will shortly slow down, alter orbit and head for earth.
Reverse thrust will be fired just one second before the capsule lands, slowing the capsule down to five miles an hour in what can only be defined as the equivalent of a carefully managed accident
For the trio on board the Soyuz capsule, the sensation as reported on BBC will be like going over the Niagra falls in a flaming barrel.
The Soyuz space capsule will touchdown at 1014 am.
However, the astronaughts bone and muscle density will be quite low and they will not be able to open the hatch themselves as they will be too weak and disoriented from the return journey.
The place the capsule will land in Khazakstan, a remote isolated area, traditionally used by Russia for such missions primarily because of this.
photo-BBC-This still from Nasa television shows captures the moment the Soyuz capsule undocked.  By Sibusiso Ngwenya