NOBEL LAUREATE JAMES WATSON, WHO DISCOVERED THE DOUBLE -HELIX STRUCTURE OF DNA with partner Francis Crick in the 1950s , stripped of honorary titles after spewing more racist comments about intelligence 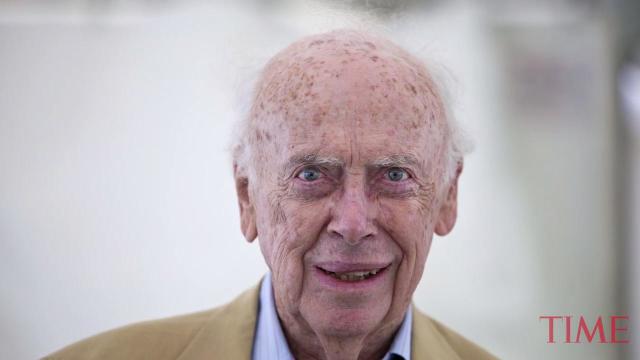 Nobel laureate James Watson has been stripped of honorary titles by the laboratory he once led after spewing more racist comments about intelligence on a recent PBS documentary.
Watson, who discovered the double-helix structure of DNA with partner Francis Crick in the 1950s, said in “American Masters: Decoding Genetics” earlier this month that genes are responsible for inferior intelligence among blacks.
Cold Spring Harbor Laboratory on Long Island immediately lashed the comments by the 90-year-old scientist as “reprehensible” and completely without a scientific basis.
“Dr. Watson’s statements are reprehensible, unsupported by science, and in no way represent the views of CSHL, its trustees, faculty, staff or students. The Laboratory condemns the misuse of science to justify prejudice,” said a statement from the lab.
While the lab “appreciates” Watson’s “substantial scientific legacy,” the statement added, his latest comments are “utterly incompatible with our mission, values, and policies, and require the severing of any remaining vestiges of his involvement.”
Stripping him of his remaining honorary titles
The lab ejected Watson from his role as chancellor and from administrative duties in 2007 following previous racist remarks – even though he retracted and apologised for the statements.
This time the laboratory is stripping him of his remaining honorary titles, including honorary trustee and chancellor emeritus.
In 2007 Watson told the Sunday Times that he was “gloomy about the prospect of Africa” because “all our social policies are based on the fact that their intelligence is the same as ours, whereas all the testing says not really.”
In the documentary he admitted that his views on race and intelligence had not changed – “not at all.” There’s a “difference on the average between blacks and whites on IQ tests,” he said. “I would say the difference is … genetic.” He also said he took no joy in his conclusion. The situation is “awful,” he said, “just like it’s awful for schizophrenics.” He added: “I like black people.”
Watson has also been accused of anti-Semitism, sexism and anti-gay prejudice.
In 1997 he told the Sunday Telegraph that a woman should be allowed to abort a child for any reason, including for homosexuality if a gene could be found that determined it. He also suggested in 2000 that there might be a link between a person’s weight and ambition, and between an individual’s skin color and sexual prowess, Gizmodo reports. yahoo